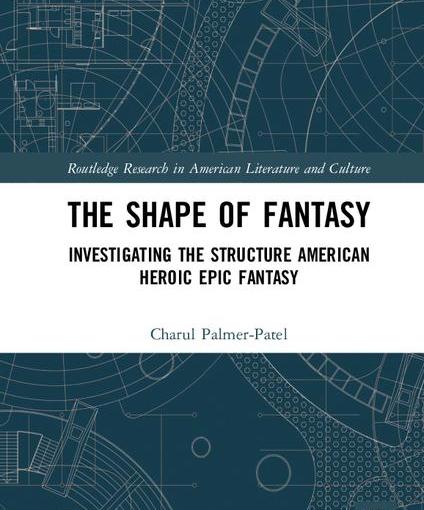 The Shape of Fantasy: Investigating the Structure of American Heroic Epic Fantasy

The Shape of Fantasy examines elements of plot, character, and setting, in Heroic Epic Fantasy fiction.

Now available to order in paperback. Note that individual chapters can be purchased in e-form on the Routledge website . Table of contents and chapter descriptions are listed below.

Each chapter examines a novel published by an American author from 1990-2009 as a case-study.

The Shape of Fantasy remains a fine book, a desperately needed excursion into a woefully neglected part of modern fantasy

The introductory chapter begins with an outline of current research in Fantasy fiction and establishes a working definition for Fantasy. The second part of the chapter then identifies and defines the Heroic Epic. By exploring the structure of the Heroic Epic (a combination of plot, the Epic, with character, the Heroic), we can build the foundation for further research in similar narrative patterns. The chapter concludes with an outline of the perimeters of this research and selected cases studies, along with a rationalisation for any known limitations.

Chapter 1 – The Shape of a Hero’s Soul: Interrogating the Destiny of the Hero in Lois McMaster Bujold’s The Curse of Chalion (2001)

Prophecy or the idea of the ‘Hero of Destiny’ are essential motifs in Heroic Epic Fantasy fiction. This chapter argues that while prophecy may drive characters and events in a narrative, the hero’s free will is not limited. Drawing from a tradition of Stoic philosophy, chapter one explores that, while the shape of the hero’s nature is pre-determined by a metaphysical entity, it remains up to the hero’s free will to determine whether to fulfil the functions of their design. This analysis utilises Lois McMaster Bujold’s The Curse of Chalion (2001), the first stand-alone novel of the Chalion universe (2001-present), as a case study. Using the novel as a model of Heroic Epic Fantasy, chapter one demonstrates that in a narrative with prophecy and fate, the hero interacts with these devices through an assertion of free will.

Chapter 2 – Forks in the Road: Assessing the Paradoxical Nature of Fixed and Fluid Time in Mercedes Lackey’s The Fairy Godmother (2004)

This chapter argues that the events in a Heroic Epic Fantasy can be articulated by a tensed theory of time, by either branching-futurism or no-futurism. This approach considers a conception of time that focuses on its possibilities, similar to the principles of quantum mechanics: “quantum mechanics […] predicts a number of different possible outcomes and tells us how likely each of these is” (Stephen Hawking, A Brief History of Time 64). In this way, Heroic Epic Fantasy fiction effectively combines a fixed path of destiny with the fluid paths that arise from the hero’s free choices. This analysis utilises Mercedes Lackey’s The Fairy Godmother (2004), the first stand-alone novel in the Tales of the Five Hundred Kingdoms series (2004-2012), as a case study. Using the novel as an example, this chapter argues that Heroic Epic Fantasy portrays the idea that the future has many possible outcomes and the motif of fate simply demonstrates the possibility of fulfilling one of these potentials.

Chapter 3 – Building Layers of Character: Analysing the Construction of the Hero in Robert Jordan’s The Great Hunt (1990)

Through the process of deciphering their destiny for themselves, Heroic Epic Fantasy heroes can determine how to act according to their own interpretation of events. In this way, the hero is constructed by the text, and, reciprocally, the hero constructs the text. Chapter three first considers the notion of a strange attractor in chaos theory which helps to model the idea that the hero of Heroic Epic Fantasy mediates, attracts, and induces events around themselves. The chapter then discusses the hero’s interrogation of fate through a metafictional awareness of prophecy as a narrative. This analysis utilises the second book of Robert Jordan’s The Wheel of Time series (1990-2012), The Great Hunt (1990), as a case study. Using the novel as a model of Heroic Epic Fantasy, this chapter examines the character’s processes of interpretation in detail, illustrating how layers of reading are built up in a Heroic Epic Fantasy text.

Chapter 4 – The Ou-Hero: Considering the Possibility for the Hero to Become Villain (and Vice Versa) in David Farland’s The Wyrmling Horde (2008)

This chapter examines how aspects of the heroic pattern can be found in another character, the ‘ou-hero,’ or a character that demonstrates the potential to be hero but fails to actualise the role. The similarities between hero and ou-hero indicates the possibility of the one to become the other. By examining this relationship, this chapter also begins a discussion on the concepts of ‘balance’ and ‘binaries’ which is an important part of Heroic Epic Fantasy fiction. This analysis utilises David Farland’s The Wyrmling Horde (2008), the seventh book of the Runelords series (1998-present), as a case study. While the potential for the hero to become ou-hero is notable in many Heroic Epic Fantasy narratives, Farland explicitly switches the roles of protagonist and antagonist in the second part of the series. This complication reinforces the conclusions of the first part of this book: that the choices characters make following a period of introspection redefines their identity as hero, or, indeed, as, ou-hero.

While the previous chapter discussed the possibility of the hero’s failure in Heroic Epic Fantasy, this chapter further expands on the qualities that redefines the character as hero. The identity of the character as actualised hero is confirmed through their function as a messianic figure. This position is first, conveyed through their relationship to their community, and second, is realised through the moment of sacrifice by a willing confrontation with death on behalf of that community. More importantly, the hero’s fulfilment of their messianic role is dependent on the knowledge and understanding of the relationship of the balance the world and the ways in which their interactions impact on this balance. This analysis utilises Gail Z. Martin’s The Summoner (2007), the first book of the Chronicles of the Necromancer series (2007-2009), as a case study. Using The Summoner as an example, this chapter asserts that the hero’s comprehension of death is an essential aspect of the hero’s journey as this knowledge allows the hero to fulfil a messianic sacrifice on behalf of their community.

Chapter 6 – Breaking into Fantasyland: Investigating How Fracturing and Entropy Motivates the Plot in Terry Goodkind’s Stone of Tears (1995)

Chapter six explores John Clute’s conception of “Wrongness” and “Thinning” (“Fantastika in the World Storm,” 2007) through the notion of entropy fracturing or thinning world boundaries. Entropy directly operates to unbalance good and evil (as discussed in the previous chapter). The penetration of the metaphysical into Fantasyland increases entropy, thereby stimulating and escalating the plot of the Heroic Epic Fantasy novel. Although Heroic Epic Fantasy is often seen as a struggle between good and evil, this chapter asserts that, rather than the defeat of an antagonist, the overall obstacle that the hero must overcome is an increase of entropy which has resulted in an unbalance of good and evil in the world. This analysis utilises Terry Goodkind’s Stone of Tears (1995), the second book of Terry Goodkind’s Sword of Truth series (1994-present), as a case study. The chapter concludes with a survey of other Fantasy texts in order to better establish the claims of this chapter.

Chapter 7 – The Hero as Portal: Examining the Hero’s Role as Reversal of Entropy in James Clemens’s Shadowfall (2006)

Chapter seven explores how the Heroic Epic Fantasy hero resolves the central conflict by functioning as a portal or threshold. Much like James Clerk Maxwell’s demon, the hero separates out entities that are abnormal to Fantasyland back into its proper positioning. In doing so, the hero is a liminal figure who stands at the threshold of Fantasyland. As such, the hero’s body is particularly significant, as it allows a metaphysical entity to pass through them into the physical world. This analysis utilises James Clemens’ Shadowfall (2006), the first book of the incomplete Godslayer Chronicles (2006-present), as a case study. Using the novel as an example, this chapter demonstrates that the Heroic Epic Fantasy hero resolves the major conflict of the narrative by expelling this entity out of Fantasyland by operating as a portal between the physical and metaphysical world.

In Order out of Chaos (1984) Ilya Prigogine and Isabella Stengers use chaos theory to describe how entropy results in a creation of new structures. They identify how “far-from-equilibrium conditions” transforms a system from a state of disorder to that of order. In doing so, a new system is formed. As this chapter explores, the same occurs in Heroic Epic Fantasy fiction, as these far-from-equilibrium conditions allows the hero to restore Fantasyland. In doing so, Heroic Epic Fantasy cycles back and forth between states of utopia and anti-utopia as the populace responds to change. This analysis utilises Brandon Sanderson’s Hero of Ages (2008), the last book of the Mistborn trilogy (2006-2008), as a case study. This chapter examines cycles of stability and instability in the novel in order to discuss the effect that chaos and the attempt to attain equilibrium has on the structure of the Heroic Epic Fantasy plot and the final resolution of the main conflict of the narrative.

Chapter 9 – Chaotic Cycles: Evaluating Patterns Within and Between Sequel Series in David and Leigh Eddings’s The Seeress of Kell (1991)

The practice of Heroic Epic Fantasy sequels and long-running series indicates that the resolution of the plot is ephemeral. Chapter nine consider the cycles of repetition between Heroic Epic Fantasy narratives and series as a constant movement between different equilibriums. These cycles are chaotic; there are nuances between cycles, so that the sequel series may deliver different meanings and conclusions from the one before it. This analysis utilises David and Leigh Eddings’ The Seeress of Kell (1991), the last book in the Belgariad (1982-1984) and Malloreon series (1987-1991), as a case study. Using the novel as an example, this chapter argues that the movement between sequel series is a constant deterioration and re-establishment of new equilibriums. Specifically, this chapter asserts that sequels represent chaotic systems; while the sequels are repetitive of the work that came before it, there is enough variation between parts that the author can deliver an expected and unexpectedending simultaneously.

The afterword considers the importance of the Heroic Epic structure in allowing us to discuss narrative and story, rather than focusing on taxonomy and the presentation and acceptance of Fantastical elements. This analysis utilises All the Weyrs of Pern (1991), the novel that concludes the narrative arc of Anne McCaffrey’s Pern (1967-2012), as a case study as the identification of the series as a Fantasy or Science Fiction has been long contested. But, as this afterword argues, Fantasy fiction is not antithesis to Science Fiction, and the narrative structure of the Heroic Epic is a unifying thread that allows us to examine story cohesively. More importantly, this chapter discusses the nature of the Heroic Epic structure as metafictional. This chapter concludes that, rather than being simplified, repetitive, and formulaic, the repetitions within the Heroic Epic pattern create a resonance by building layers of depth and complexity.