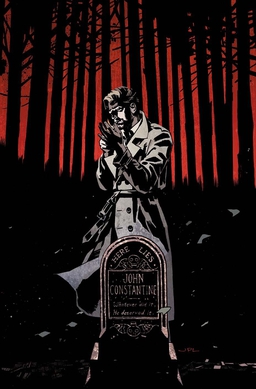 Continuing my discussion of portraits in Neil Gaiman’s Sandman which I began here, in issue 3, “Dream a Little Dream of Me,” we are treated to a portrait on the very first page. We see a suburban house and someone lying on the bed. The bed is in complete shadows, stark dark shading juxtaposing the lightness of the room. Only a hand is shown. The accompanying text describes decay: “Her hair comes out in clumps“; “Her skin is flaking“, “the ragged nails rip her skin when she scratches” (bold font part of original text). The narration draws the reader to assume that the text is referring to the person lying in the bed. “She’s counting to a hundred,” the narration says, alongside another text box (presented in different colours and typography) in which someone is counting. The narrative text continues: “Will she dissolve it in her mouth? Breathe it? Rub it into her skin”. The accompanying picture shows a hand reaching to bag sitting on the nightstand, open, with white power spilling from its opening. On the bedside table is a framed photo of a grinning woman, with a certificate of some sort in her hands. The woman is pretty. The picture is smashed. Lines of broken glass mar her face. And yet, the photo continues to sit on the small bedside table despite this damage.

When we turn the page, we see a shot of an alarm clock radio: “… for all of you crumblies out there, here’s one from the vaults. A real rave from the grave.” Was the narration not actually a description of the scene, but instead the DJ narrating a short section of prose before playing their next song? Our new protagonist, John Constantine, begins: “Have you ever have one of those days when something just seems to be trying to tell you somebody?” What an odd question. Flipped around like that. Instead of “somebody trying to tell you something.”  Throughout the next few panels, we see that John is haunted. By snippets of music. By dreams and nightmare. Something trying to tell him somebody. Madd Hattie, who is 247 years old, warns him that Morpheus, the Sandman, is back. John dismisses it as a fairy story.

John Constantine is another DC original with his own series, Hellblazer (although you might be more familiar with him through the film or television adaptations, especially the Keanu Reeves 2005 film and the 13 episode cancelled series produced by NBC from 2014-2015). Constantine is a sorcerer, a working-class detective, and an occultist who regularly converses with angels and demons alike.

Morpheus aka Sandman aka Dream catches up with John 3 days later, in pursuit of a leather pouch full of sand. John thinks its in storage, but after 2 hours of searching finds nothing except an old photo. It’s a picture of John with a girl. The one from the bedside table? The portrait triggers John’s memory, and so we follow the trail of crumbs (in photo form) to find Dream’s leather pouch. Again, we see the picture John has found as he and Dream are in a taxi cab: “Everyone shuts up, and Chas jolts us up the motorway. Our visitor melts into the back seat shadows. And I remember Rachel. Amazing Rachel. Junkie Rachel.” Junkie Rachel who ran out on him and stole his stuff to pawn for junkie money.

When John Constantine and Dream find Rachel, the readers are shown the same scene from the first page: a bedside table with a framed portrait, pouch on table, the rest of the room in dark impenetrable shadows. We’re shown Rachel on the next page, nearly a full spread, naked, decaying, a living corpse. At the bottom of the page John lights a cigarette, an obvious attempt to regain his balance. “Jesus. Rachel. Jesus.” Next to this panel is the photograph of the two of them again. Like with the photograph of John Dee in the last issue, the portrait here is of a past nearly forgotten, of a life and identity that can never come to be again. But while in issue 2, the new image of John Dee haunts the reader, warning of the possibilities of the future, here the haunting gives a small sense of closure. Dream gives Rachel a happy dream before she dies, of herself restored, healthy and beautiful again. “She knows he’s waiting for her,” John, the love she ran out on. By doing so, Dream restores the reality of the picture, creating a dream space that doesn’t haunt but instead allows John Constantine to move forward and walk away from this image of the past. It ends the issue on an odd optimistic note: although Dream is on his way to Hell, John walks away singing “Mister Sandman” in good cheer.

One thought on “Sandman Issue 3: “Dream a Little Dream of Me,””